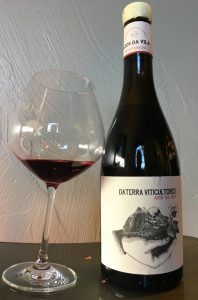 2016 Laura Lorenzo, Daterra Viticultores, Azos de Vila, Ribeira Sacra, Spain.
The Azos de Vila Tinto by Laura Lorenzo’s Daterra Viticultores is a unique field blend of co-fermented Mouraton, Mencía, Garnacha Tintorera (Alicante Bouschet), Merenzao, Gran Negro, Doña Blanca (a rare local white varietal), Colgadeira, Godello (the native white varietal) from very old vine plots that range from 80-120 years old in the Granite, Gneiss, Clay, Slate and Schist soils of the Manzaneda zone in Val do Bibei, close to the Ribeira Sacra in Spain’s cool Atlantic climate in Galicia. Laura Lorenzo, the one woman army, winemaker and heroic viticulturist, worked at an established Ribeira Sacra estate, Dominio do Bibei for close to a decade, but also did southern hemisphere stints at the famed estates of both Eben Sadie, Sadie Family Wines, maybe the best producer in South Africa and Achaval Ferrer, one of my favorite producers in Argentina. All of which help her form her own ideas and skills, so in 2014, she struck out on her own, creating the label Daterra Viticultores, focusing on native grapes and intense vineyard sites, where she works organically in the Val do Bibei-Quiroga (a) sub-zone of Ribeira Sacra and beyond into remote Valdeorras region, though mostly she farms the steepest of slopes above the Sil River. Lorenzo’s natural styled Azos was partially de-stemmed and fermented with wild yeasts in old, open-top French oak barrels with 20 days maceration, then raised for 11 months in a mix of used 225 and 500 liter oak casks and inert/neutral influence chestnut barrels, before its bottling without any fining or filtration for extreme purity. The 2016 Azos is high toned, showing blackberry, briar, wild plum and strawberry along with tangy currants, aromatic floral tones with violets and incense, complexly flavored and with surprising depth, mineral intensity, wildly spicy too giving dusty red pepper and shaved raw cinnamon, leathery rawness and with a classic low alcohol profile and brightness at 12.5% natural alcohol. This 2016 showing a slight rustic charm and dark fruit presence in the glass with a dark garnet/red hue that intrigues the senses and thrills the medium weighted palate that reminds me a bit of Crozes-Hermitage, but more exotic. Laura Lorenzo continues to set the world on fire with her soulful wines, her Daterra stuff rocks and this one is knocks my socks off, these wines are hard to find, but worth the effort and don’t overlook her exceptional Godello based white either, drink this Azos de Vila over the next 2 to 3 years.
($33 Est.) 94 Points, grapelive