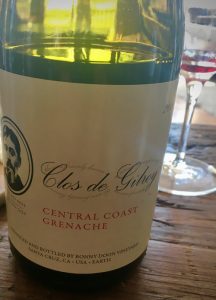 2016 Boon Doon Vineyard, Grenache “Clos de Gilroy” Central Coast.
Randall Grahm’s Syrah “Le Pousseur” ($26) and Grenache “Clos de Gilroy” ($20) are two of the best deals in California wine, especially their current releases, seriously delicious, detailed and well crafted these two wines rock and deserve your attention. In particular, this 2016 Clos de Gilroy is in a great place right now, it is wonderfully and exotically perfumed and complex in form with great balance and very Mediterranean in style with a warm ripe nature and pleasing Grenache purity. The Clos de Gilroy, unlike the name would suggest, comes from two sites within Monterey County, Alta Loma in Arroyo Seco mainly and Rancho Solo near Soledad, making for an opulent red wine that stands out for its deep floral bouquet and round palate, it, without question way over delivers for the price, Grahm and team absolutely killed it in 2016 for this wine. Quite dark for a modern Grenache with a lovely garnet/ruby core and hints of bright magenta this Clos de Gilroy has lots of fruits up front and clearly displayed with sweet raspberry, strawberry, plum and pomegranate filling the mouth with a touch of pepper, briar, cinnamon stick, chalky stones and kirsch that all add to the classy presentation found in this expressive Grenache. I have enjoyed this wine in the past, but this seems to have raised the game and might be a tough act to follow up on, Grenache is on the rise in California with wonderful offerings coming from almost every corner of the state, but you should not miss this one. This visit with Randall Grahm at his awesome tasting room in Davenport, just north of Santa Cruz, was great follow up to my visit last Spring, there is always something new to explore here, this time also I re-discovered Grahm’s staple Grenache and Syrah (2013 “Le Pousseur” and this 2016 “Clos de Gilroy”) both of which excelled and over performed, plus I got to taste the brilliant young vine 2015 Popelouchum Grenache (Rayas Clone), which I was thrilled to finally try as only a half barrel was made, as well as an amazing set current releases including the 2014 Bien Nacido X-Block Syrah, 2015 Old Telegram Mourvedre, 2012 Cigare Volante, 2010 Le Cirgare Blanc Reserve and the gorgeous 2017 Picpoul! Grahm’s whites and reds on equally brilliant, I would be hard pressed to pick a favorite, even though I think the 2014 Le Cigare Blanc Reserve is one of the best white wines made in California! The Bonny Doon Vineyard Clos de Gilroy is a medium/full bodied sexy Grenache that should not be missed or overlooked, again I was deeply moved and impressed with Randall’s wines, with this one drinking shockingly good.
($20 Est.) 93 Points, grapelive