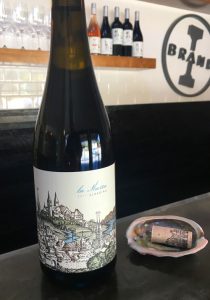 2017 Ian Brand “La Marea” Albariño, Kristy Vineyard, Monterey County.
The La Marera Albariño, coming off a unique bench land vineyard that is set on the broken sediment of ancient sea beds with some shales, it’s a site that brings out an inner brightness and mineral intensity, but with an extra bit of hang time that allows full flavor development with low natural alcohol, and Ian Brand’s 2017 is near perfection with an added dimension that reminds me more of Pouilly-Fume than Galicia! The 2017 La Marea Albariño is bursting with vitality and old world (read Loire Valley Sauvignon Blanc) like charm to start with intense gooseberry, lemon/lime and dusty chalkiness, Brand gave a small amount of skin contact and used no malo, this I believe adds to it’s gripping personality, it also shows an earthy tone, as well as a righteous steely edginess, this is wonderfully complex for such a light and youthful wine, though with air in the glass things get back to the varietal character with white peach, green/bitter apple, sea breeze/briny and wet river rock and a mouth watering saline and citrus finish. This cooly crisp Albariño really goes it’s own way in this vintage, it makes for a nice counterweight to Joyce’s ultra brisk/clear version and Richard Alfaro’s leesy round style, with all three being exceptional examples of California Albariño, all would be admired by the best producers of the Rias Baixas, Albariño’s historic home. Monterey’s whites are getting their grove on in recent years, and there’s a lot to discover beyond Chardonnay, especially Albariño, along with the gorgeous white Rhone inspired offerings like Randall Grahm’s Le Cigare Blanc and his Bonny Doon Picpoul, both of which rock, as well as the dry Rieslings of the region, look for Joyce Vineyards and Stirm Wines. Brand is continuing to create a masterful lineup of wines and is one of the central coast’s top guns, his new P’tit Paysan Pierre’s Pirouette Rose is also a must have Summer wine and do not miss his amazing Cabernet Franc(s), Cabernet Sauvignon and old vine Mourvedre under his I. Brand & Family label, along with his sexy old vine La Marea Grenache, in particular the new 2015 Brosseau, all of which are great bottlings. This whole cluster pressed and cold fermented Albariño is an electrically charged white with verve and playfulness, it is seriously a thrill in the glass with it’s vitality and complexity, again with a start that will fool and seduce with that extra layer of Sancerre like character with a tiny hint of flinty, cat pee, wild herbs and pretty white flowers all making subtle appearances in this lovely and refreshing dry wine that begs for goat cheese(s) or fresh fish (both raw and delicately cooked), a great pairing for oysters and mussels as well, drink now and often.
($24 Est.) 93 Points, grapelive