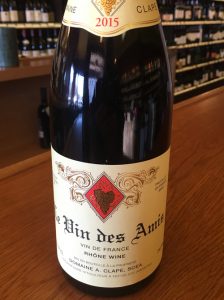 2015 Domaine Auguste Clape, Vin de France Rouge “Le Vin des Amis” Rhone, France.
The beautiful and old school 100% Syrah Clape Le Vin des Amis comes from near Cornas and is from 40+ year old vines set on galets or river stones, so it doesn’t have quite the intensity of the pure granite sites, but that said, this is a pure and deeply colored joy of a wine that is one of the great secrets in the wine world! Auguste the patriarch , Pierre-Marie the main man and winemaker and now Olivier the grandson at the famed and historic Domaine A. Clape, which was founded back some 250 years ago, are three generations working together to make some of the world’s most sought after wines, in fact Auguste, the former mayor of Cornas, was the first to bottle his own estate made wine in Cornas, paving the way for the following generations and now Cornas is now thought of in the same way Hermitage, Saint-Joseph and Cote-Rotie were and are. Clape does five wines, the top being their Cornas, as well as a second Cornas, the Renaissance, the all Marsanne Saint Peray Blanc, a 100% Syrah Cotes-du-Rhone and this Le Vin des Amis that comes from a tiny 1 hectare site, it is a spicy, earthy and fresh red that has terroir character of the region as is a great way to start exploring the Clape lineup. The 2015 Clape Le Vin des Amis is ripe and round on the palate with a deep garnet and purple hue that starts with a mix of crushed violets, lavender oil, black and green olives, peppercorns and tart currants. There is a hint of game/meat, iron, leather, but in the mouth you get blueberry, boysenberry and a touch of cassis. This little Syrah was fermented in cement and raised six months in the concrete vat or cuves then another six months in old foudres, 1,200L French oak casks, the grapes were native yeast fermented and mostly all whole cluster that gives that stemmy green spice, with a touch of celery to the background and a cinnamon/baking spice note. The Le Vin des Amis is a wonderful example of Syrah and place, I love this vintage, maybe my favorite since 2010, it lingers with hints of black salted licorice, blackberry and a mineral/stony/earthy essence that is both humble and darkly sexy, drink over the next 3 to 5 years.
($30 Est.) 92 Points, grapelive