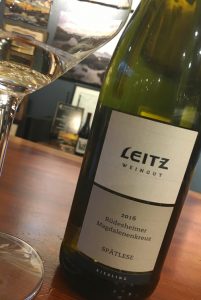 2016 Weingut Leitz, Riesling Spatlese, Rüdesheimer Berg Magdalenenkreuz, Rheingau Germany.
The Maggie Spatlese from Josi Leitz is a classic wine, traditional and terroir rich in it’s flavor and history, this Magdalenenkreuz Cru parcel of Rudesheimer Berg is where the steep slopes end and the rolling hills where a mix of mostly sandy loam along with slate, loess and clay begin, named for it’s location near “The cross of Mary Magdalene,” named after a red sandstone cross that can be found within the vines. This site gives a bit more body and opulance, it has a lovely early/loamy character as well which adds contrast to a fruity/semi sweet style as it does in this delicately pale/clear 2016 Spatlese, this is one of those great wines that people just need to enjoy as it is without prejudice of sweetness (sugar levels) as it has fine form, balance and never feels heavy. The 2016 is brightly focused and laser crisp and detailed with a nice generous fruitiness, perfect for spicy tuna rolls and or pan Asian cuisine with mixed citrus, green apple, loam, wet river stones, tart apricot, white cherry, crystallized ginger, a hint of Thai basil and a saline element. This is a vintage of vibrancy and lightness to start, but good extract lurks beneath and it should age with fantastic effect, being here during this harvest, I saw how glorious these grapes looked before picking, a brilliant golden hue and amazing energy with ripe flavors, but with lifting acidity in their veins. The weather was dismal and cold most of the year without much in the way of a break, it was looking almost disastrous until late August and September came to the rescue with warm sunshine giving the winemakers a chance at a remarkable year, with Leitz being one that took full advantage of nature’s amazing comeback and respite, with Johannes Leitz making some fantastic stuff, in particularly in the Kabinett and Spatlese range, like this one! This is a standard barer wine and a solid reference point to what you should expect of a modern Spatlese, it is extremely clear and transparent, it transmits everything in it’s purest form, Leitz is a little like Greg Brewer, winemaker at Brewer-Clifton and his own label Diatom, they both strive for the cleanest expression of grape and place, they have a zen like attitude and approach to their wines, it’s honest, it’s about the core essence and clarity of mission, it’s a type of wine that makes for a near perfect reference point. This is such a tasty wine, it’s certainly under valued for it’s lasting palate impact and impression and the quality in the glass, and while the GG’s at Leitz, imported by Schatzi Wines, that grab the headlines these days, it’s best not to forget or over look this beautiful traditional Spatlese Riesling, this is a wine to follow for the next decade at least.
($26 Est.) 92 Points, grapelive