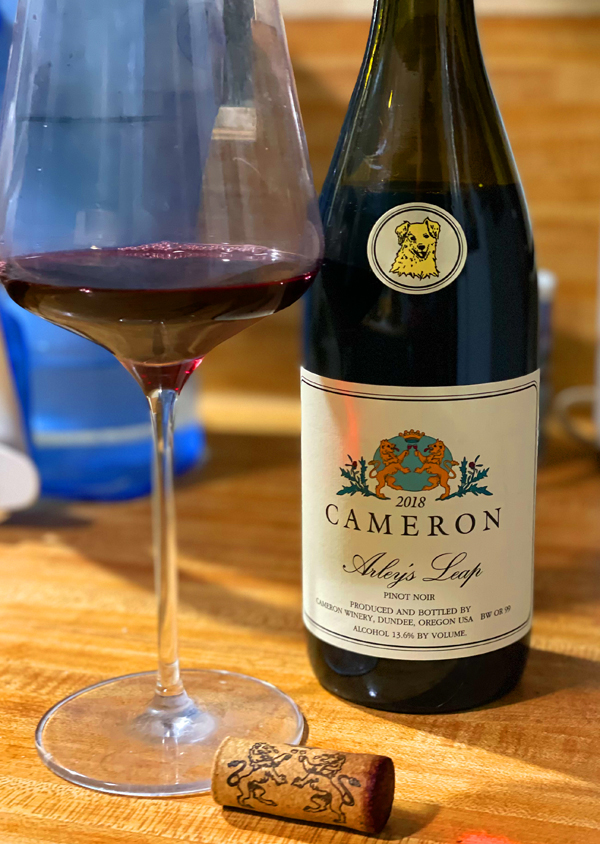 2018 Cameron Winery, Pinot Noir, Arley’s Leap, Abbey Ridge Vineyard, Dundee Hills, Willamette Valley, Oregon.
This year’s Arley’s Leap Pinot is a dead ringer for some old school Burgundian classics, in particular Bernard Maume’s famous Gevrey-Chambertin Lavaux St. Jacques bottling with a deep and earthy medium bodied, but firmly structured palate, that after air opens up wonderfully. This 2018 is complex with layers of black cherry, mulberry, currant and cranberry fruits along with reductive earthy elements, hibiscus tea, sanguine iron tones, tobacco leaf and wilted roses. Cameron’s legendary winemaker John Paul has nothing but high praises for this site, saying year after year the Abbey Ridge Vineyard produces some of the best Pinot Noir in Oregon, going on he adds that It is not the richest or the ripest, but it is clearly one of the most elegant sites in the the Dundee Hills if not the entire state. This wine really bares that out and I was incredibly impressed by the ever lasting finish and lingering violets, blue fruit, rosemary and sandalwood, making for a thrilling experience, even though it looks to have even more potential to evolve over the next decade. The Arley’s Leap, as with all of Cameron’s Pinots, it was fermented with the indigenous yeasts in open top tanks in which, Paul jokes, beautiful women immerse their nude bodies in the warm must to keep things exciting in the cellar, but more seriously the wines are made in a traditional Burgundian way with a gentle regime of daily punch downs and minimum intervention. The resulting wine was aged for nearly 2 years in a mixture of French oak barrels varying from new to completely neutral and bottled without filtration.

The Cameron Arley’s Leap Pinot Noir, named after Bill & Julia Wayne’s beloved dog Arley, is sourced from a single block of grapes that is located at the highest point within their Abbey Ridge Vineyard. This wine, as winemaker John Paul explains, is solely composed of a handful of old red burgundy clones, and the grapes from this 25 year old section are typically the very last Pinot Noir to be harvested in the Dundee Hills and have loads of energy and earthy tones, slightly less ripe than other prime spots. The resulting wines, Paul continues, are therefore relatively high in natural acidity and display old world aromatics, certainly as this one does, with a dark pigment, stoniness and lifted by red spices. Set on the red dirt and Jory volcanic soils of the Dundee Hills, there is always a unique sense of the exotic, though well contrasted by the raw and rustic personality, these Cameron wines never fail to excite Pinot Noir fans. Cameron believes the best grapes come from dry farmed vineyards and he likes to have his wine aged longer in barrel with most his top Pinots, as noted above, seeing an elevage of close to 24 months. For his barrels, he chooses a small cooper who lives in the village of Saint Romain in Burgundy. His name is Claude Gillet and together with his children and several master coopers they turn out some of the most exquisite wine barrels to be found, and almost Every year Claude and his son, Laurent, visit Paul’s winery, to taste the wines in barrels and make recommendations for choice of forest, toast level and all of the other minutia that go into crafting an oak barrel. Since Paul believes that barrels reach their perfection only after a couple vintages, he prefers to utilize cooperage which is 1-3 years old for our most precious cuvées. These are stunning artisan wines and this one is well worth searching out!
($60 Est.) 94 Points, grapelive