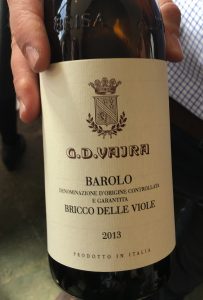 2013 G.D. Vajra, Barolo, Bricco delle Viole, Piedmonte, Italy.
One of the modern world’s great wines, Giuseppe Vajra’s signature Bricco delle Viole has taken the world by storm, I first discovered this wine, along with most Americans and the wine press, in the 2008 vintage and have been lucky enough to have tasted with Vajra on three occasions in recent years in San Francisco, and this last time I got to try his latest 2013 version, which is a truly stunning Barolo. The beautiful 2013 Bricco delle Viole is a deep and textured wine, highlighting both vintage markers and terroir crafted in Vajra’s clear and transparent style, there’s just layer after layer of purity and natural complexity with a medium/full palate and gorgeous length, it starts with floral tones and delicate spices before revealing it’s fruit density and textural roundness. With faint tarry intensity that hints at an underlying power, this 2013 Bricco delle Viole Barolo turns on it’s charm with air showing refined, but structured tannins that frame everything to near perfection, it gives black cherry, damson plum, strawberry reduction and tangy currant fruits along with a touch of earth, cedar, anise and an array of spice, incense and wild herbs. This is some serious Nebbiolo, no question, but it drinks amazingly well in it’s youth, maybe less concentrated than the 2010 it is not far off in overall quality and I think it will provide long term aging rewards as well. There’s an inner brightness and the acidity adds an extra pop that some riper vintages lack, this might be explained by Bricco delle Viole being a high-altitude site, set in Vergne in Barolo, standing at between 400-500 meters above see level, with some vines being in the 60 year old range, it is also one of the highest in the region with hardened clay/marl soils allowing for satiny balanced wines, as this one is. Vajra employs mostly traditional winemaking methods, though some new techniques, such as temperature controlled fermentation are used to showcase elegant and perfumed wines. In most vintages the Bricco is fermented in stainless with lengthy cool ferments which last about 3 weeks with gentile pump overs before resting in large Slovenian oak barrels for up to 42 months. This 2013 is impressive in complete detail and focus, Giuseppe Vajra is an amazing talent and this wine is absolutely a must for the Barolo enthusiasts, like a Grand Cru Burgundy it delivers a sense of place and is a magical seduction of the senses, I must say this vintage might be a sleeper, don’t be fooled by it’s ripe silkiness, there’s real substance here, it’s one of my favorite wines of the year, drink from 2022 to 2032.
($90 Est.) 96 Points, grapelive