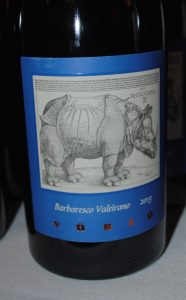 2013 La Spinetta, Barbaresco, Valeirano, Vursu, Piedmonte, Italy.
The youthful and compact Valeriano Cru Barbaresco from Giorgio Rivetti looks set for a marvelous future, and while I usually rave on and on about his Starderi Cru, which is most often my personal favorite, this Valeirano 2013 certainly has all the charms and it’s highly seductive in it’s gorgeous layering and striking length. This modern Barbaresco saw 20 plus months in new French medium toast Barriques, it’s a non filtered and unfined cuvee from a granite rich site known as the Tresio vineyard, which gives it’s floral and mineral toned nature, it’s full bodied and with ripe tannins, but should age with graceful vitality and substance. This wine has a great track record for cellaring with style and this warm vintage 2013 has classic Nebbiolo intensity and character, I was expecting a lot and ended up even more impressed than I could have imagined, I found an inner beauty and delicacy that belies the forces of nature and youth, as well as the new oak, this is a smashing wine of class and presence, and it will only get better from here! This 2013 La Spinetta is forceful on the palate with firm framing, but with a sexy opulence and an attention grabbing nervy lift, it’s without a doubt pure Nebbiolo at it’s best with brandied cherry, damson plum, raspberry and tangy currant fruitiness along with flinty stones, vanilla, saline infused licorice, cola bean, minty basil and a hint of bacon. The mix of spring flowers and rose petal are so far quite subtle, but there and add to the polished and lavish flavors, while the mouth feel expands with air allowing a glimpse into the future of this Barbaresco that looks to become a full bodied effort once everything is in place. It will, in my opinion, turn out to be of the same class as a modern Grand Cru Burgundy, in a way it reminds me of a Corton with it’s deep red fruits and garnet/ruby hue in the glass, great stuff to put away for 10 to 15 years!
($150 Est.) 94 Points, grapelive