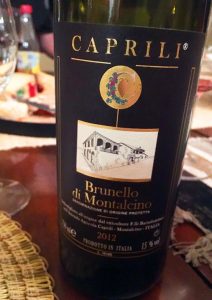 2012 Caprili, Brunello di Montalcino DOCG, Tuscany, Italy.
The 2012 Caprili Brunello is a full bodied and densely pack wine with complex layers and ripe tannins, it’s just hitting it’s stride and should go another decade or two no problem, impressive for it’s palate impact and near perfect expression of terroir and varietal character, it is as pure as it gets. Caprili, run by Giacomo Bartolommei, and farmed organically, is an under the radar Brunello estate in the southwestern sector of the Montalcino zone, close to Tavernelle. It’s in a prime spot of Montalcino, established in 1965 when they split off from the famous Pieve Santa Restituta estate, it sits next to Pieve Santa Restituta and adjacent to Soldera, so you known they are in top notch company. Caprili has perfect exposure, south-southeast at between 225-340 meters in elevation, with soils that is a touch more sandy than in other parts of Montalcino, and influenced by the cooling breezes from the sea to their west, all of which shows in the wines elegance and aromatic charms, especially in this beautiful 2012 Brunello that displays a heightened sensation of fruit and a sensual mouth feel. Caprili works traditionally and naturally in the cellar, with a minimalist approach to winemaking, the Brunello sees fermentation in stainless steel using native yeasts, that takes about 7 to 8 days, that is followed by a lengthy maceration, then aged large neutral casks for 3 years before bottling, released 5 years from harvest. Layered and dense this 2012, 100% Sangiovese Grosso (Brunello Clone) delivers a full force of flavors with dried cherry, raspberry, tangy currant and racy plum fruits along with savory earth, tobacco leaf, cedar, a hint of tar, balsamic/strawberry and incense/floral tones, adding mineral and anise as you swirl this dark garnet hued Brunello in the glass, it’s a pure velvety Sangiovese wine that has a core of Tuscan warmth, with a rich texture and subtle rustic charms, with everything in harmony, with everything as it should be. It’s surprisingly great even now, but should prove a rewarding wine for the longer term as well, best from 2020 to 2030. As a side note, if this 2012 is this good, I can’t wait for the much more heralded 2013!
($45 Est.) 94 Points, grapelive