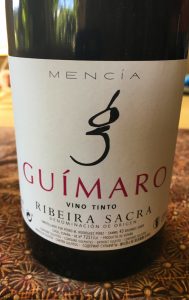 2016 Guimaro, Mencia, Vino Tinto, Ribeira Sacra D.O., Galicia, Spain.
Pedro Rodriguez’s Guimaro basic Mencia is an un-oaked Tinto in the “Joven” mode, grown on the steep slopes within the Amandi area, Ribeira Sacra’s most prime subzone with south facing vineyards planted on slate (along with granite and sand) just above the river Sil, it comes from multiple plots of Mencia vines, along with a small amount of other co-planted native varieties, with an average age of 40 years old. This ancient region is a re-discovered and glorious wine area, the Ribeira Sacra, which means “Sacred Banks” in Gallego, the local Galician dialect is home to the most difficult to farm vines in the world, it is more like the Mosel than Rioja, it’s cool climate zone that produces wines of fine mineral charm and bright rustic flavors. I love the Adega Guimaro’s wines, especially this lovely fresh Tinto, it’s one of the best red wines for the money I’ve ever had in a lighter style, it reminds me of Fleurie (Gamay) meets Crozes-Hermitage (Syrah) with a touch of Nebbiolo and Pinot Noir added, it’s dry, juicy and full of personality. Pedro Rodriguez and his family come from a long line of colleteiros, vignerons and farmers, working in the Amandi area, Ribeira Sacra’s most prime subzone with south facing vines, planted on remarkable angles and with Roman influenced terraces, and his parents Manolo and Carmen still work the vineyards daily alongside him, he started the Guimaro (which means Rebel in local dialect) 1991, but it has really become a standard barer producer in the last 10 years with the help of Pedro’s mentor Raul Perez, the Godfather of Mencia, who makes his own legendary wines in Bierzo. It’s known that this area has a long history in winemaking, it just got lost to the outside world because of the remoteness and the hard conditions to work this place, originally the Romans came to this green, northwest corner of Iberia some 2,000 years ago, they were the first to terrace, grow vines and make wine in Ribeira Sacra, but now people are taking notice again and it’s one of Spain’s hotspots. In recent years, Guimaro and Laura Lozenzo’s Daterra Viticultores have taken the wine world by storm, with both red, with Mencia based wines and whites using the Godello grape making a big impact. This Tinto by Guimaro is made with mostly de-stemmed Mencia, it is fermented with native yeasts in stainless with lees aging for about 6 months allowing a real pure essence of terroir and grape to shine through, with this 2016 being a bit less extracted than the 2015 and incredibly vibrant and lively in the glass. With it’s bright ruby/garnet hue and acidity this Guimaro Tinto shows layers of tangy marionberry, plum, tart red cherries and racy and earthy currant fruits as well as flinty mineral spice, a hint of orange rind, tar, anise and subtle violet florals, all wrapped in a light-medium bodied wine that is so easy to quaff, it’s natural 13% alcohol allowing sublime balance. Like a fun Gamay, this Guimaro will be a handy Summer red, as it can be enjoyed with a slight chill for warm days and outdoor drinking, it’s a great choice for BBQ’s and picnics, it’s playful, but can also be a lovely companion with even more refined cuisine, drink over the next 3 to 5 years.
($19 Est.) 91 Points, grapelive