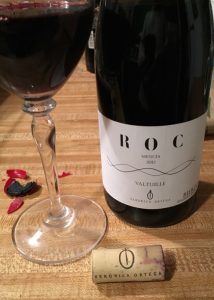 2012 ROC Veronica Ortega, Mencia, Valtuille, Bierzo DO, Spain.
Beautifully integrated and vivid, the Veronica Ortega Bierzo 2012 is a rich and smooth example of Mencia with deep layers and silky tannins. The ROC wines are imported by Eric Solomon Selections European Cellars and are very limited in the United States, but are worth searching out for their depth and elegance, these are expressive and lovely wines that feel fuller on the palate than the more spicy/earthy Ribeira Sacra versions of this Galician varietal. Veronica, born and raised in Cadiz, near the Sherry region, had not had a family experience in wine, but has emerged into a real winemaking talent and a sought after producer, her CV is amazingly impressive for someone so young, she’s worked at top Burgundy domaines, including Domaine de la Romanee-Conti, like Caroline Diel of Schlossgut Diel, as well as Comte Armand, plus tours in Portugal and the Rhone as well as even a turn at Burn Cottage in Central Otago, New Zealand, with Ted Lemon of Littorai fame, and on her return to Spain she worked alongside the famed Raul Perez, the Mencia master, and fell in love with Bierzo. Her own project started in 2010, she works 80 year Mencia vines in Bierzo, all organic, in the hamlet of Valtuille de Abajo on sandy limestone soils, she works everything by hand, fermenting with some whole cluster, long macerations up to 25 days, and aging in 2 and 3 year old French barrels. The 2012 is maturing with satiny grace and shows Veronica’s gentle touch with blackberry, tangy currents, wild plum and bing cherry fruits, it’s quite dark in color with purple/garnet hues and it’s texture is divine, it keeps fresh with vital acidity and it has subtle cinnamon and peppery spices, mineral tones, earth and light wood notes. This is a refined example of Bierzo with lots of polish and poise and makes a nice contrast to the more edgy more Atlantic and granite influenced Ribeira Sacra versions like Laura Lorenzo and Guimaro, which I love too. Veronica’s wines are getting headlines and she has joined the Bierzo elites like her mentor Perez and Alvro Palacios, this is a winery to start following, no question, and this 2012 is a great place to start.
($48 Est.) 92 Points, grapelive