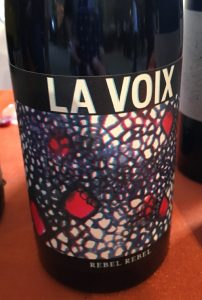 2014 La Voix, Pinot Noir “Rebel Rebel” Quinta del Mar Vineyard, San Luis Obispo County.
Steve Clifton’s solo project the La Voix Winery is his first gig since splitting with Brewer-Clifton, one of the Sta. Rita Hills top Pinot Noir and Chardonnay producers that he co-founded with Greg Brewer back in the mid 1990’s, and is showcasing his own path in winemaking with a set of small lot hand-crafted wines. I got up with Clifton at the Pebble Beach Food & Wine fest and got to taste through his latest releases both from his Italian inspired Palmina label and these beautiful and natural La Voix wines, which included a lovely Chardonnay, a Bordeaux blend from a high elevation site in the Santa Ynez Valley and this stylish Rebel Rebel Pinot Noir. The Rebel Rebel is named after David Bowie’s classic song, that was the first cover that a young rocker Steve Clifton recorded! Clifton was a musician and performer for years before he got into wine seriously and this Pinot Noir reflects this song (as a Rebel) in it’s character since it is the first wine he has made from outside Santa Barbara County as well as being a wine that is completely different to the Brewer-Clifton stuff of the past and present, maybe more a true mirror of his own personality, less zen purity and more Rock n Roll is how I might think about it. The 2014 Rebel Rebel has ripe fruit, lots of spice, earth and racy texture with intriguing lush layers and amaro notes along with a flamboyant core of deep red cherry, plum and wild raspberry fruits, plus cinnamon/exotic spice, dried flowers, loamy/stony elements and a touch of sweet oak. Made using native yeasts, in open-top fermenters with an extended maceration with about 10% whole cluster, then aged for a year in French wood with only about 10% new, the La Voix is a highly attractive Pinot Noir that was crafted from selected clones 50% each 115 and 777, modern Dijon, that give this wine it’s dark color and vibrancy as well as it’s rich mouth feel and impressive length. I’ve always admired the Brewer-Clifton wines over the years, as well as Steve’s own efforts with Palmina, and it’s great to see his rocking it into the future with these La Voix offerings, drink the Rebel Rebel Pinot over the next 5 to 7 years.
($45 Est.) 93+ Points, grapelive