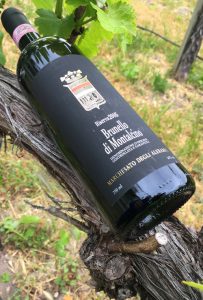 2005 Marchesato Degli Aleramici, Brunello di Montalcino DOCG Riserva, Tuscany, Italy.
Super old school Riserva, pure Sangiovese Grosso, this wine screams Brunello from another time, it’s earthy, slightly oxidative and rustic, but still excites the palate with classic acidity and raw tannins showing dusty plum, macerated cherry and red berry fruits along with grainy tobacco leaf, wild mushroom, minty herb, dried flowers, aged cedar and licorice. Imported by Siena Imports, Marchesato Degli Aleramici is a virtual unknown Brunello producer, located in Camigliano in the Bogatta natural park, in the west of Montalcino where the terroir is more marine influenced and the wines tend to pick up a saline element, underbrush and have a heightened herbal and hoisin (balsamic) character, which comes through with air on this 2005 Riserva. The wines tend to get better ratings in Decanter than the American wine press due to their earthy profiles, though this is a very fine mature example. This took a bit of coaxing to reveal it’s depth and fullness, but turned surprisingly good and layered after 10 minutes taking on a sweeter/riper character and eased it’s tannic attack gaining refinement and length, it almost felt as if it was reborn, very much in keeping with old school Brunello. This Marchesato degli Aleramici Brunello di Montalcino Riserva is as advertised was traditionally made within the strict legal requirements of Brunello, 100% Sangiovese Grosso, long macerations, with a minimum of aging, being in oak for 2 years and at least 4 months in a bottle before release, with Riservas getting an extra year added on, in most cases coming to market 6 years after harvest, with that oak being large Slavonian oak casks in this case, and coming in at a vintage norm of 14% natural alcohol. Much much better after aeration, this wine is seemingly peaked, it would be a good time to pop them corks, and best to decant and have with a hearty meal with lots of proteins, it’s color is a nice garnet with a touch of brown on the edges and it has an aged stewy/pruny quality, but it get’s it groove on and turns in a good performance, drink sooner v. later.
($60-90 Est.) 92 Points, grapelive