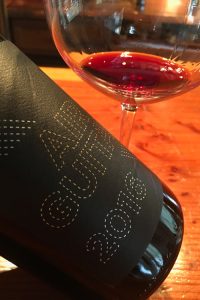 2016 Bow & Arrow, Air Guitar Red, Willamette Valley, Oregon.
This Bow & Arrow Air Guitar is an unique Loire Valley, think Anjou, inspired red blend bursts from the glass with carbonic/whole cluster juiciness and bright intensity, made with natural wine stylings it’s a cuvee of 60% Cabernet Sauvignon and 40% Cabernet Franc, and while it seems at first to playful and fruity like a Cru Beaujolais, it takes on a more serious cord with air gaining the Cabernet’s tannic grip and the spicy stems while filling out in the glass. This ruby/garnet Air Guitar is from organic sites, with the Cabernet Sauvignon from Borgo Pass Vineyard and the Cabernet Franc from the biodynamic Johan Vineyard, it highlights the vintage with ripe flavors and expressive charm, and all though I think Scott Frank’s other red blend, the Gamay and Pinot Noir Rhinestones is revolutionary and a next level wine for Oregon, this one too grabs my attention and the effort is to be admired with layers of fresh picked blackberry, racy cherry, plum and tangy currant fruit along with a hint of jolly rancher, cinnamon, black olive. light mineral, with a herbal stemmy nervy groove and a faint cask note from the used French oak punchon it was aged in. While the winery says the rocking good Air Guitar is a self deprecating poke at attempting French style wines in America, it is certainly not a failed attempt and I’m continually impressed by their wines, especially their Gamay and Pinot Noir offerings along with their Sauvignon Blanc(s) and their sensational Melon de Bourgogne, which is briny saline and muscadet like, this is a winery to follow, and as a bonus the prices are stupidly reasonable. This is fun stuff from Bow & Arrow, drink now or hold for up to 5 years, these 2015-2016 reds and 2016-2017 whites plus the Rose are the best yet from these guys, don’t miss them.
($24 Est.) 91 Points, grapelive