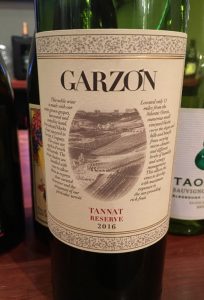 2016 Bodega Garzón, Tannat, Reserve, Uruguay.
This deeply colored and flavored Tannat from Garzon comes from selected blocks coming from vineyards within 11 miles of the Atlantic Ocean that get plenty of warm sunshine and cool breezes that allows full ripening and balance, making for a complex and spicy wine. Done in modern, but not over done style with clean and clear detail this Garzón Tannat Reserve is full bodied and loaded with rich fruit decadence, but with a nice balance of tannin and acidity that allows a core of tar, spice and bite to offset the dense black fruits, which include black plum, currant, dusty raspberry and a touch of fig, I had this in a blind tasting and was leaning towards an ultra expensive cool climate Aussie Shiraz or maybe something with a touch of Cabernet or Mourvèdre in it, as we were doing Southern Hemisphere, but I got a huge surprise when it was revealed as pure Tannat, then it made such sense, especially after air when this wine added some leathery/earthy notes and brambly spices. This is a powerful and dark/inky wine, and it impresses for it’s unique and ever so slightly rustic character, aged in mostly used French oak and fermented in cement vats it has enough old world charm to make it thoughtful, but enough international cleanliness to please the many over the geek squad, it’s a wine I would buy no question, it also would be great with robust cuisine, as food brings out prettier elements and floral shadings. This Tannat finds the right path between international polish and the more traditional/rustic style like you’d find in a French version, say a Madiran or the Pyrenees Basque Irouleguy, you get a little bit of both and it’s the better for it, fun and impressive stuff from Uruguay, a country that deserves more attention than it gets.
($18 Est.) 91 Points, grapelive