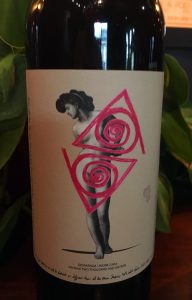 2016 Desparada, Syrah “Niobe” White Hawk Vineyard, Santa Barbara County.
Vailia From’s Desparada White Hawk Syrah is a show stopper with deep layers of black and red fruits, making it a great version of this singular vineyard, made famous over the years by Adam Tolmach of the Ojai Vineyard, Manfred Krankl of Sine Qua Non and Maggie Harrison of Lillian, it sits on the southern facing slope of Cat Canyon some 21 miles from the Pacific and 2 miles north of Los Alamos in Santa Barbara County on Arnold sand and Elder shaly loam. Vailia who got turned on to this fruit because she buys Sangiovese from here aged her White Hawk Syrah in 25% new French, 25% onetime used and 50% neutral (French) barrels to let the fruit express itself, and that it does, it feels dense and lively in the mouth somewhere between the delicate Ojai version and a more fruit forward style wine like an Alban Syrah giving the same thrills of both in a well crafted wine and it’s a great first 100% Syrah effort from Vailia, who considers herself an Italian and Bordeaux varietal producer. Desparada is a very unique all women winemaking team led by Vailia that makes craft wines in her winery in Paso Robles’ Tin City, an artisan industrial park that supports the micro producers in the region. I’ve followed these wines for quite awhile now and have always been impressed by their spirit and character, but I recently tasted through the new releases and found they have reached the next level and have gained impressive detail and grace, I especially loved her set of Sauvignon Blanc(s), her “Suitor” a fabulous red blend of 60% Cabernet Sauvignon, 36% Sangiovese and 4% Cabernet Franc, it’s a beauty that over delivers for the price too, plus Soothsayer, a cool cuvee of 59% Cabernet Sauvignon and 41% Barbera, and this “Niobe” White Hawk Vineyard Syrah. The Niobe starts with lifted aromatics with a subtle floral perfume and mineral note before the wave of thick black fruits fills the full bodied palate with layers of boysenberry, cherry compote, wild plum and vine picked berry fruit along with spice, cedar, camphor, dark chocolate, fig paste and dried flowers. There’s a burst of youthful acidity that gives a juicy tone to this lush Syrah, and the sweet tannin is ripe and gives this red a velvet spine, there’s even more to come too, rewarding potential looks like a sure thing, I plan to give the bottle I bought about 3 to 5 years in the cellar. Vailia is also experimenting with some amphora aged stuff, so I also scored a very limited bottling of her clay pot raised Sangiovese, also from the White Hawk Vineyard as well as her Nebbiolo, new Picpoul and the ultra cool Arclight which is a Rosé of Sangiovese, Barbera, & Nebbiolo! My recent visit to Paso Robles was a huge success, this trip confirmed that this region is still defining itself and is bursting with exciting new producers and small wineries that are fully embracing being different and crafting distinct California inspired wines using proprietary blends of grapes, I highly recommend discovering Desparada, Vailia From is putting out some amazing things.
($50 Est.) 93 Points, grapelive