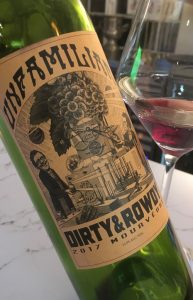 2017 Dirty and Rowdy, Mourvedre “Unfamiliar” California.
Petaluma’s Dirty and Rowdy Family Wines, was established in 2009 with partners Hardy Wallace and Matt Richardson focused on unique vineyard sites of Mourvedre and who’s motto is “Untinkered with wines, so many soils, and (so many) miles, made of mostly Mourvèdre” are without question one of must try wineries of this new current crop of indie winemakers crafting some value priced and natural/authentic offerings without pretense and this Unfamiliar Mourvedre bottling being one not to miss wine! Usually made with rustic abandonment, the boys at Dirty and Rowdy had to change their up methods with this harvest (2017) and hustled to produce a clean and clear wine, this regional blend Mourvedre is the result of serious hard work, mostly due to a intense three day heat wave I would guess, that altered the best laid and laid back plans! Coming off a group of selected vineyards that included: Shake Ridge Ranch, Rodnick Farm (formerly Antle), both Skinner vineyards, Rosewood, Wonderment Rd., Alder Springs, and Brosseau, this Unfamiliar Mourvedre unites Amador, Chalone and Mendocino County to name just a few AVA’s and it shows a bright and juicy character and a tangy savory contrast to the up front fruit, the final blend of this ruby/garnet hued red was 85% Mourvèdre, 10% Syrah, 5% Grenache of whole cluster goodness, with grapes, 90% of which was organic, that needed a lot of extra TLC. That all said, the end result is wonderfully restrained at a labeled 12.5% and is easy to love showing sweet raspberry, pomegranate, racy plum and sweet/tart cherries on the medium weighted palate along with a nice sense of mineral, light floral elements, acidity and dried lavender/herbal notes. Due to the complexity of the harvest and a few stuck ferments, this was maybe the most un-natural version of Dirty and Rowdy’s Mourvedre as it was not all natural, native and needed filtration to be as delightful as it is, so it looks to be maybe a one off in style, but certainly not a misfit, I really love this stuff, drink now.
($23 Est.) 91 Points, grapelive