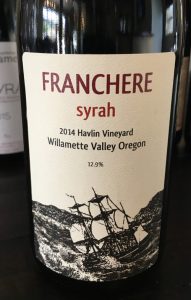 2014 Franchere, Syrah, Havlin Vineyard, Willamette Valley, Oregon.
Absolutely new to me, the Mike Hinds, a distant relative of the Franchere’s that were some of the first to explore the Willamette Valley, hence the label name) made Franchere Syrah is a slightly feral/wild and intriguing Syrah the sustainable Havlin Vineyard in the Van Duser quarter of the Willamette Valley, a cool climate site, especially for Syrah, it’s a native ferment low sulfur wine that was aged 15 months in purely neutral cask, all French. This wine smells more mature that it is, most likely the used barrels were the issue, but the palate is vital, intensely vivid and vibrant, at 12.9% it is light/medium in body with faint florals and bright focusing on tangy red fruits, spice and mineral notes giving way to a rustic old school element. I was happy with the charm and character of this Willamette Valley Syrah, which I doubt I’ve had before, most Oregon Syrah comes from the southern and north eastern ends of Oregon in the Del Rio area, Rogue or along the Columbia Gorge closer to Washington State. Starting with that a bit of old barrel earthy funk, the Franchere opens nicely and gives good account of itself overall and is way better after an hour open, plus much more entertaining with food, especially meat dishes including flank steak, Turkish lamb and or savory mushroom choices. Round boysenberry, plum and tangy currant fruits lead the way along with tart blueberry, anise, plus a mix of peppercorns baking spices and a soft tannic structure that makes for easy enjoyment, it lingers on with kirsch and dusty loam. I look forward to trying more from this winery which is more known for their natural/organic Pinot Noir bottlings. I was a tad bit worried by the nose of this bottle (which I’ve been told is an isolated thing maybe because I didn’t let it settle long enough after shipping as it has very low sulfur?), but the palate was perfectly fine, drinking well and the wine certainly showed better with air, there is promise here, but I’d suggest decanting and drink in it’s youth just to be sure.
($22 Est.) 90 Points, grapelive