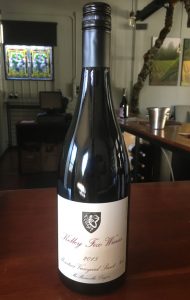 2015 Kelley Fox Wines, Pinot Noir, Momtazi Vineyard, McMinnville, Willamette Valley, Oregon.
The biodynamic Momtazi vineyard 2015 vintage Pinot Noir from Kelley Fox is one of my favorite Oregon Pinots of all time! Joining the greats from Beaux Freres, 1994 and 2008, and some of John Paul’s Cameron, Ken Wright, Doug Tunnell’s Brick House, Bergstom and St. Innocent, especially their Freedom Hill(s) this stuff is seriously great with stunning layers and intense whole cluster expressiveness, and while still a baby, it is remarkably poised and perfumed, if you like stems this is your jam. Vivid and filled with electric shock detailing this wine is a thrill on the palate and the finish lasts forever, this is not a Pinot Noir to be missed. Kelley Fox started her own label in 2007, after beginning her career winemaking at Eyrie, the long time Oregon Pinot (and that influence shows very clearly in the wines she produces under her own name), followed by a 10-year stint (2005 to 2015) as winemaker at Scott Paul. She launched her own winery in 2007 and now produces around 2,000 cases a year of lithe, mineral-driven and strikingly pure Pinots from two of the Willamette Valley’s most highly regarded and meticulously farmed vineyards, Maresh and Momtazi. Native yeasts are used for all of the wines, and anywhere from a third to three-quarters whole clusters have been used since the beginning, but as of the 2015 vintage Fox (used 100%) and will be using all whole bunches going forward whenever possible. This Momtazi reminds me a little of Philippe Pacalet’s Nuits-Saint-Georges, but maybe even better in all areas, this is an unreal almost out of body experience in the glass with amazing purity of fruit, and even with all the stems it shows transparent terroir and elegance, it’s first impression is exotic, sexy and with a nervy tension of herbs and spices, but with a few hours of air a true sense of class and place take control delivering an almost perfect performance. The palate of black cherry, pomegranate and briar laced vine picked berries is full and dense while still having an exciting vibrancy of acidity adding strawberry compote, candied orange peel, aromatic and bitter herbs, roses, light earthy tones, mineral, tangy cinnamon and refined and subtle framing of French oak notes. This is wildly fascinating Pinot Noir that can be enjoyed now, but oh man the potential rewards for 5 to 10 years in bottle are massive, I adore this now, but I am locking a bottle away to re-visit in 7 or so years. I have just got my hands on the 2016, which I’m told is even better, so I can’t wait to try that one too, but that is going to be a tough act to follow as this is mind blowing.
($49 Est.) 97 Points, grapelive