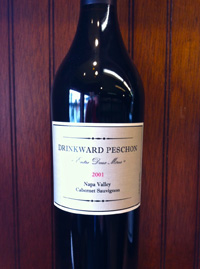 2001 Drinkward Peschon, Cabernet Sauvignon “Entre Deux Meres” Napa Valley.
Francoise Peschon, winemaker at Araujo and her friend Lisa Drinkward of Beherns and Hitchcock make a small amount of wine under their own label Drinkward Peschon, a artisan Cabernet Sauvignon from Napa Valley. This 2001, the second vintage, certainly put them on the wine map and now in their 12th year they have proven themselves fine and talented winemakers. It was great to sample an older vintage of their wine to see how things evolve and without question this is a wine of balance, grace and quality, lucky those that have some of this wine in the cellar, and who were able to buy it at release price, which was about half of what the current wine costs. The 2001 shows smoke, pencil lead, acacia flowers and red currants on the nose leading to a silky palate, that bottle age has really smoothed out the tannins, revealing boysenberry, black cherry and baked plums with savory tobacco and cedar spice. The wine gets fuller and more dense with air bringing a cassis note and a licorice element out as well, plus a mouth filling texture that lingers and makes for a long finish. Drink this Cab up if you have it, though it still has some life left and should not fade for another 5 years.
($90 Est. Current Vintage) 92+ Points, grapelive