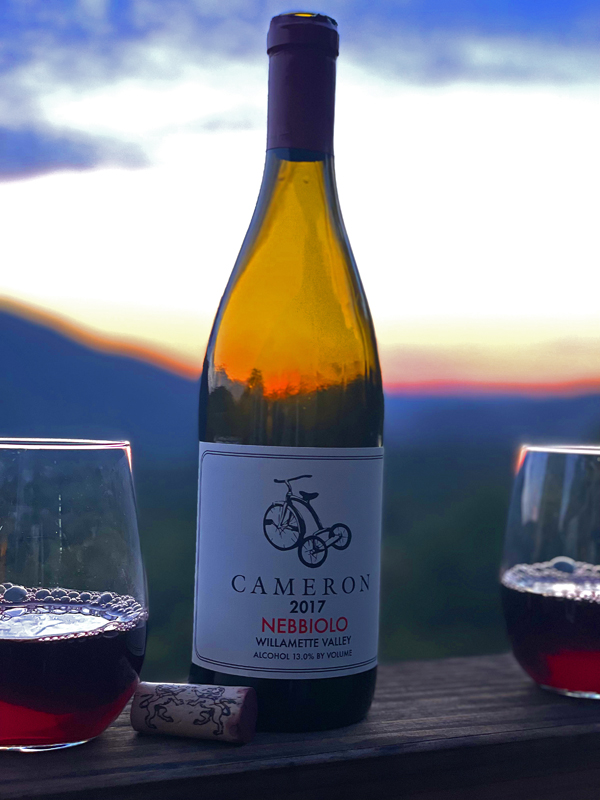 2017 Cameron Winery, Nebbiolo, Dundee Hills, Willamette Valley, Oregon.
The 2017 Nebbiolo from Cameron is beautifully balanced, aromatic, ripely flavored and flows crossed the full bodied palate with a sultry earthiness and pure varietal character, that could easily be mistaken for a true Barolo, all together this is brilliant and impressive stuff. The Cameron Nebbiolo, with its radiant red fruits, including raspberry, black cherry, damson plum and mulberry, is sourced from the winery’s estate Clos Electrique vineyard in the Dundee Hills, set on the classic Jory (volcanic) soils, and handcrafted by winemaker John Paul, the Oregon legend who’s Pinot Noirs are some of region’s greatest wines. This vintage feels a little less dense than the 2016, but maybe more authentic in style with background accents that includes touches of wild mushrooms, dried flowers, black licorice and a sanguine/iron note, along with hints of cedar, blood orange and meaty/savory elements. This dark garnet Nebbiolo is a wine that greatly benefits from air and protein rich foods, which allows the full array of its layers to shine through, making it a very compelling effort and one of the new world’s best examples of this Piedmonte grape. I highly recommend checking out Cameron’s latest releases, all of which are exceptional and authentic offerings, they deliver loads of personality and charm, and while I always thrilled to try their Pinots, I especially adore these Northern Italian varietal wines.

The Clos Electrique Vineyard, according to the winery, is planted to approximately 3 acres of Pinot Noir, 2 acres of Chardonnay, half an acre of Italian white grape varieties, including Friulano, and 1 acre of Nebbiolo, used in this wine, that was first planted back in 1994. As mentioned in prior reviews, Cameron’s John Paul, who is a huge Italian wine geek and Barolo enthusiast, believed that Nebbiolo could thrive here as it was on a similar parallel to Alba and as Paul notes, that hazelnut trees do well in both Piedmont and in the Willamette Valley, in fact Paul cleared an ex-hazelnut orchard to plant his two clones of Nebbiolo. Very early on, it was clear he was on to something here and his Nebbiolo has shown the fruits of his efforts, with his 2015, 2016 and 2017s all being awesome wines. The Cameron Winery uses non irrigated vines that are farmed all organically which adds to the wine’s concentration and Paul employs traditional old world winemaking techniques in the cellar with this Nebbiolo, which sees an extended elevage in the Barolo mode in mostly well seasoned oak. The Cameron or Cameroni Italian inspired wines, some of my favorite Oregon wines, are outstanding, especially this Nebbiolo, along with an exciting series of whites, like the Friuli style blend, the amphora aged Friulano, the Pinot Bianco and the Ramato, which is a skin contact Pinot Grigio. This Nebbiolo has a firm backbone, but the tannins are silky, so it can be enjoyed now and over the next 5 to 7 years easily.
($38 Est.) 94 Points, grapelive