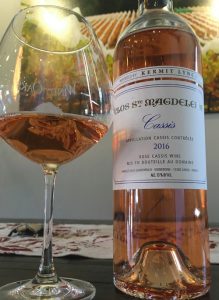 2016 Clos Sainte Magdeleine, Cassis Rose, Provence, France.
One of Provence’s most sought after producers, Clos Sainte Magdeleine crafts mostly Cassis Blanc (A blend of Marsanne, Ugni Blanc and Clairette mostly with a touch of Bourboulenc), but in recent years they have been getting lots of attention for their Rose, which is a modern Provence blend of 40% Grenache, 40% Cinsault, 20% Mourvèdre which is a rival to the more famous pinks of Bandol and Domaine Tempier. Like Tempier, imported by Kermit Lynch, Clos Sainte Magdeleine is organic and very limited, for the Rose they used 100% de-stemmed fruit and quick cold fermentations to preserve intense freshness, all temperature controlled stainless cuves are employed, it’s racked off the lees early and doesn’t go through malos, it’s raised for under a year (in stainless) before bottling. The grapes come off the regions limestone and clay soils with the red grapes vines being between 10 and 40 years old, it close to the sea, so there is the saline and cool freshness the Mediterranean brings along with a ripe warm of this sunny South of France place. The Sack-Zafiropulos family has been making wine here for four generations, with Jonathan Sack now producing the wines in the beautiful awe inspiring little coastal port village (Cassis), the wines are huge hit with those that want authentic crisp wines of character and quality, they pair well with the local fish based cuisine and while a hit here in the states, largely because of Kermit’s tireless promotion of the region’s wines, though also these wines grab the attention of well to do travelers that adventure to Cassis and to Marseille, the biggest of the southern cities and one with it’s own seafood culture. This 2016 is just hitting it’s stride now, it’s brilliant and intense with a regal sense of austerity and restraint with dust strawberry, earthy watermelon and tart sour cherry along with a peppery/flinty spice, wet stones and saline, which gets your saliva glads pumping along, this is light and brisk, but with a sense of vinous/sensual texture while remaining filled with fresh charm, absolutely perfection in a dry pink, this is a terroir wine of distinction and purity that will drink for a few years.
($28-34 Est.) 94 Points, grapelive