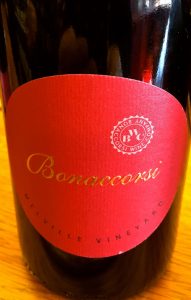 2013 Bonaccorsi, Pinot Noir, Melville Vineyard, Sta. Rita Hills.
It was really fun to taste through the current offerings from Bonaccorsi and seeing Jenne Bonaccorsi, her story and that of her late husband Michael Bonaccorsi is one of triumph and tragic heartbreak to honor, hope and inspiration, with some wonderful wine along the way. If you don’t know the history of Bonaccorsi, I’ll give you a brief recap, Mike Bonaccorsi was one of the first Master Sommeliers to seriously make wine in the United States, he was the wine director at LA’s famed Spago at the time the Sta. Rita Hills region was getting it’s breakthrough and he fell in love with the Pinot Noirs from there, so in the late nineties he and Jenne Lee Bonaccorsi, who was also at Spago and a food and wine lover, started Bonaccorsi Wine Company with their first vintage in 1999, and their wine was an instant hit. Sadly, Mike died in 2004 during harvest time, but many growers and winemakers joined together to help Jenne make that vintage and support her, and she has continued ever since. I’ve been lucky enough to have tried almost every vintage of the Bonaccorsi, and the style has remained faithful and terroir driven, and these latest wines are all lovely examples, especially the 2012 Fiddlestix and this beautiful and deep 2013 Melville Pinot Noir. Jenne, one of the few Korean-American winemakers, has a gift for wines that slowly evolve and show graceful texture and mouth feel, the Melville 2013 is just starting to show it’s full potential, made from a special block at Melville grown on the sandy coastal soil it is mostly clone 115 and with a bit of Mount Eden clone, Jenne prefers these instead of the modern Dijon, as the 115 and Eden give plenty of color and character here with the long and cool growing season, she ages the wine about 20 months in French oak, as she and Mike were inspired by Burgundy, with longer elevage, less new wood and concentrated fruit. The 2013 vintage shows pure Melville character with blackberry, mulberry, black cherry and plum, it carries it’s dark flavor profile extremely well with hints of fig, spice, crushed roses and stony notes. As it unfolds in the glass it comes to life with good energy, density and wonderful length, it feels big and broadly flavored, at 13.8% it is not heavy though, lingering with kirsch, earth/loam, anise and mocha, this is really silky, but still firmly structured, it should age another 3 to 5 years before reaching it’s true peak, a serious Pinot Noir no question, impressive artisan stuff again from Bonaccorsi, bravo.
($45 Est.) 93 Points, grapelive