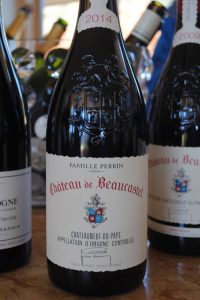 2014 Chateau de Beaucastel, Chateauneuf-du-Pape Rouge, Rhone Valley, France.
One of the leading Rhone estates, and Chateauneuf icon Chateau de Beaucastel is one of the great domaines of the world, crafting noble and complex wines that show their commitment to terroir, tradition and organic viticulture with owners the Perrin family being four generations of caretakers of their land. The Perrin’s were leaders in the post phylloxera rebuilding in Chateauneuf-du-Pape in the early twentieth century helping put Chateauneuf on the map and helping lead the region into becoming France’s first AOC in 1929, they also helped bring in a rebirth after WWII, when Jacques Perrin took over the estate in 1953 he brought many innovations and refocused the vines being planted as well as using organic methods, he many sure all the allowed varietals were used, but singled out Mourvedre as the backbone in his reds, while also highlighting Roussanne in the whites. Now the domaine and company is run by the brothers Jean-Paul and Francois who have turned the Perrin labels into a global powerhouse, much in the same way Guigal did for their winery in Ampuis (Northern Rhone rivals). Now Jean-Paul’s Pierre, Marc and Thomas are involved and look to take Beaucastel to new heights, and let’s also not forget their family’s American partnership with the Haas family Tablas Creek that has become a California classic, with Tablas Creek not only making great California Rhone wines, but also being a gift to American wine by bringing their Beaucastel vine cuttings to America allowing California wineries to take their examples to the next level with wineries like Saxum, Bonny Doon and Alban all enjoying the fruits of this gift. Recently I had the opportunity to taste through some vintage Rouge library releases as well as the current 2014 Beaucastel Chateauneuf-du-Pape red which is showing beautifully, I am always stunned by the purity and sex charms of these wines and this is a classic vintage, even though it will be over shadowed by the 2015, which looks set be a legendary year for Chateauneuf, and like the overlooked 1999 vintage, it will be a secretly coveted wine and will reward the patient. The 2014 Chateau de Beaucastel Chateauneuf Rouge is a blend of 30% Mourvedre, 30% Grenache, 10% Syrah, 10% Counoise, 5% Cinsault along with 15% of the following grapes, Clairette, Picpoul, Bourboulenc, Picardan, Terret Noir, Muscardin and Roussanne, all of which add to the house style and complexity of flavors, while the deep and meaty Mourvedre gives this wine it’s soul and spine, it is not about the individual varietals as much as place that makes Beaucastel a special wine and this lovely 2014 is fresh, intense and full of character. Grown on the classic pebblely/stones soils with a mix of limestone, clay and sand, this terroir is clearly showcased in this wonderful example. Deeply colored with a black/garnet hue in the glass it shows a fine nose of red fruits, floral tones and earthy spices that leads to a full bodied palate of boysenberry, plum, sweet currant and racy raspberry along with kirsch, lavender, chalky stones, truffle, cracked pepper, game and new leather. This vintage has an inner vibrancy and good acidity, while still feeling lush, silken and fruit driven. Fermented in concrete and aged in large foudres this is made in a clean, but traditional way, allowing for a wine of stylish class, depth and refinement that grabs your attention and leaves a hedonistic pleasure that cannot help but seduce completely. Drink this underrated beauty of a year over the next 4 to 10 years, and if you are like me, after 12 to 18 years when I think this should be fantastic.
($86 Est.) 93+ Points, grapelive